Pilots of a Southwest Airlines Boeing 737 MAX 8 reported an emergency and returned to Orlando International Airport soon after takeoff March 26, the airline and FAA confirmed.

The aircraft landed safely and the pilots followed protocol, Southwest said. FAA is investigating the incident.

The MAX is subject to a worldwide grounding following the crashes of a Lion Air MAX in Indonesia in October 2018 and an Ethiopian Airlines crash in Ethiopia in March. All passengers and crew on both flights were killed and those crashes are being investigated.

US LCC Southwest has 34 MAX 8s in its fleet of more than 750 737s and, like other US MAX operators American Airlines and United Airlines, has grounded the aircraft. But airlines are being given FAA exemptions to move affected aircraft to storage facilities. The Southwest aircraft had only the pilots onboard and was scheduled to fly to a storage facility in California. But soon after takeoff, they reported an engine problem and returned to Orlando airport.

The Lion Air and Ethiopian crash investigations are focused on whether the MAX’s anti-stall software system, known as the maneuvering characteristics augmentation system, or MCAS, was a factor in one or both crashes. The MCAS was introduced into the newest version of the 737 to match aircraft handling characteristics with those of the 737NG and decrease pitch-up tendency at elevated angles of attack. While the causes of the two crashes have not been established, Boeing is developing changes to the MCAS which are being evaluated by FAA.

Meanwhile, hearings are being held in Washington DC March 27 on aviation safety and how FAA certifies new aircraft. US Department of Transportation Secretary Elaine Chao was among those testifying. 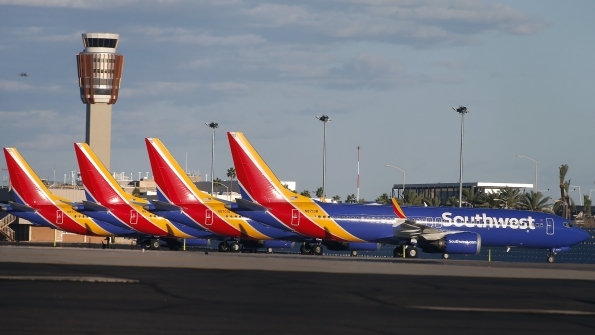