The prototype, similar to a colonoscopy for jet engines, won a German technology award April 25.

A prototype is underway using endoscopy technology from the medical field to clean on-wing the minute cooling holes on engine turbine blades. 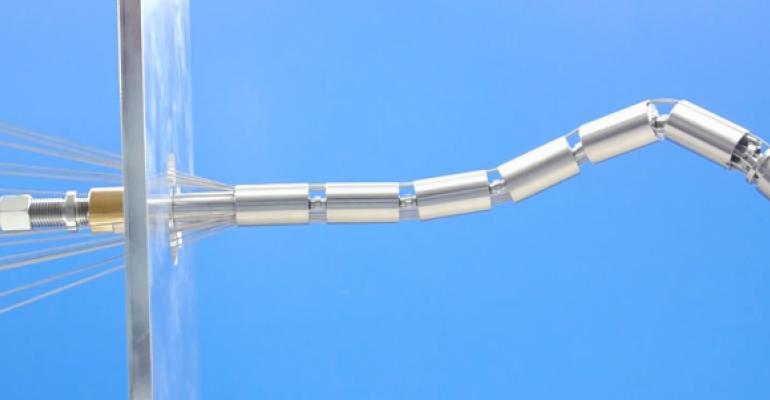 The pilot involves inserting a miniaturized and flexible probe through fuel injector entrances. The probe’s tip delivers water at pressure up to 500 bar onto the blades to clean the microscopic ducts where air passes through to cool the blades. Keeping the holes unobstructed improves fuel efficiency and reduces maintenance costs.

Rolls-Royce is developing this technology with Scholly Fiberoptic and the Frauhofer Institute for Production and Construction, which won the German Aviation Innovation Competition’s Cross Innovation award on April 25.

The early concept was conducted by the Luftfahrtforschungsprogramm aeronautical research program, and then Rolls-Royce became involved and developed the tool with the other two partners.

Rolls-Royce is testing the endoscopic procedure as a prototype on a Trent 900. If it becomes fully operational, it would replace the existing procedures that involve removing the engine, taking it apart and replacing the blades.

This project is part of the engine manufacturer’s Intelligent Engine concept, which uses digital technology to inextricably tie the product and service together so they continually improve the asset’s performance.

fodprevention.com believes this could be a great tool used to help reduce foreign object debris buildup in other mechanical parts as well. The added ability to see areas that would normally be closed off after manufacturing production can be of great importance in helping to find potential issues that you may other wise never see.