WASHINGTON (Aug. 23, 2018) — The landing gear collapse on a FedEx MD-10-10F, wide-body cargo jet was caused by corrosion that led to fatigue cracking, according to an NTSB report released Thursday.

Shortly after the FedEx MD-10-10F touched down at the Fort Lauderdale – Hollywood International Airport Oct. 28, 2016, the flight crew reported hearing a “bang” as the brakes were applied. The airplane yawed to the left as it decelerated and came to rest on the left side of the runway, followed by a fuel-fed fire on the left wing. The two crew members evacuated the plane with one suffering minor injuries during the egress. The plane was damaged beyond economical repair. 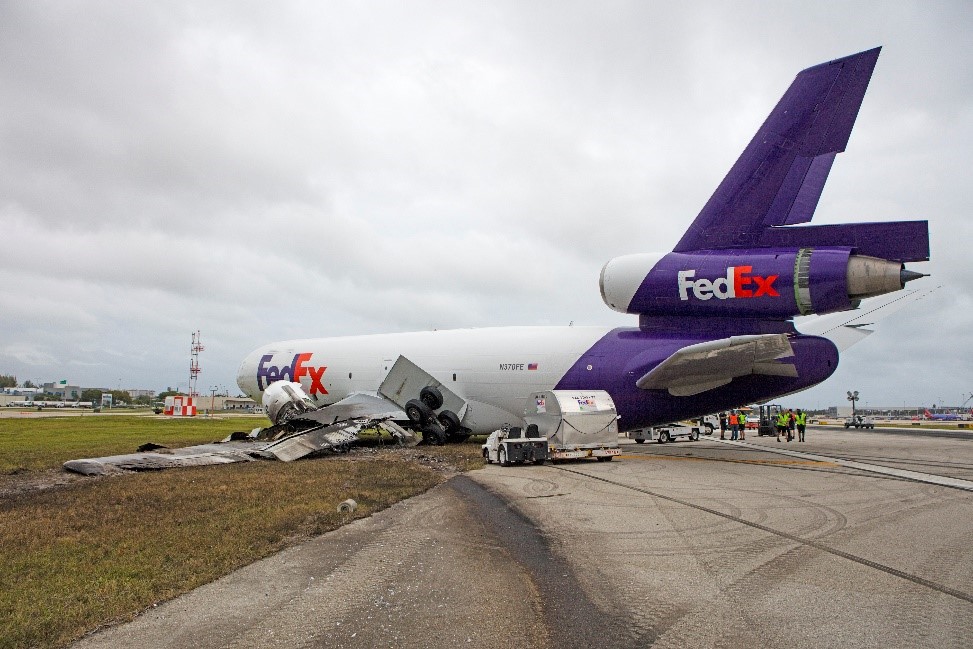 The final resting position of a FedEx MD-10-10F after it left the runway following the collapse of the left main landing gear during an attempted landing at Ft. Lauderdale-Hollywood International Airport is depicted in this Oct. 29, 2016, photo of the accident site. (NTSB Photo by Dan Bower)

Investigators found the failure of the left main landing gear was the result of a metal fatigue crack that initiated within the gear.  The crack went undetected and gradually progressed until the gear collapsed.

The NTSB also said the interval of nine years between scheduled overhauls of the main landing gear, which exceeded Boeing’s recommendation of eight years, contributed to the accident. Investigators determined the fatigue crack would likely have been detected during an overhaul. The gear failed eight years and 213 days after its last overhaul.

The 23-page final report is available at https://go.usa.gov/xUu8d.

The accident docket, which includes photographs, interview summaries, factual reports and other materials used in the course of the investigation, is available at https://go.usa.gov/xUuWd.