DARLINGTON, Ind. (WISH) — Two people died Sunday when a plane that left an Indianapolis pilot school crashed near the town of Darlington in Montgomery County.

Montgomery County received a 911 call about 10:20 a.m. Sunday about a small plane in a field north of the intersection of County Road 800 East and State Road 47, Sgt. Jeremy Piers with Indiana State Police said.

Two people were found in the plane and were pronounced dead at the scene by the Montgomery County Coroner’s Office, Piers said.

The names of the victims were being withheld for the time being so that their families could be notified, Piers said.

The Federal Aviation Administration on Sunday afternoon confirmed the single-engine Diamond Katana DA40 crashed at 10:20 a.m. in a field just outside Darlington. The FAA said the plane departed from Lift Academy in Indianapolis at 9:53 a.m. and that preliminary reports indicated two people were on board. The FAA will release the aircraft tail number after investigators confirm it at the scene. The FAA and the National Transportation Safety Board will investigate.

A spokesperson for Lift Academy shared this statement on Sunday afternoon: “We are heartbroken by this tragic accident and the loss of our team members. We will support their families in any way possible and work with the NTSB to fully investigate this event.” 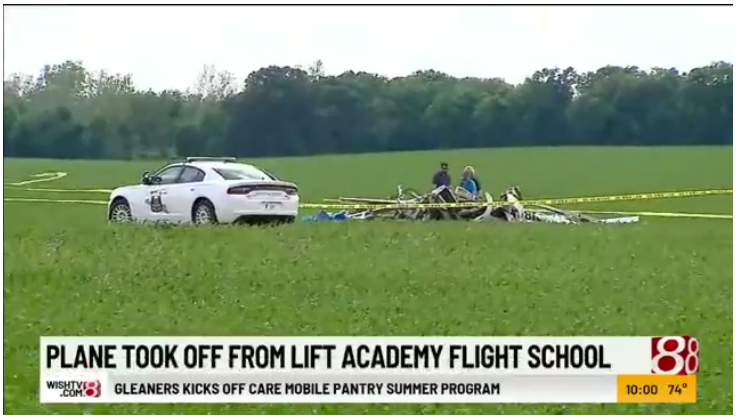 Lift Academy, the Leadership in Flight Training Academy, is headquartered near the northeast end of the campus of the Indianapolis International Airport. It opened in September 2018 and is owned and operated by Republic Airways, a regional airline also headquartered in Indianapolis. Republic operates daily flights for American Airline, Delta Air Lines and United Airlines.

The academy offers three programs, including a pathway to a career with Republic. Eight pilots from the academy’s first group of students began their careers with Republic on June 1.

original post courtesy of wishtv.com and by: Julie Dow