The Australian Transport Safety Bureau (ATSB) has just issued a report on an incident where a helicopter’s rotor blades were damaged during start up by Foreign Object Debris (FOD), namely a tool that had been left behind from earlier maintenance.

The helicopter had a Honeywell Chadwick Helmuth VXP Vibration Health Monitoring (VHM) system fitted. The day before the external diagnostics company that monitored the VXP data, advised the Air Wing of a rising vibration trend.

In all three flights were made.  After the third, two large gouges were spotted in the leading edge of one of the main rotor blades. 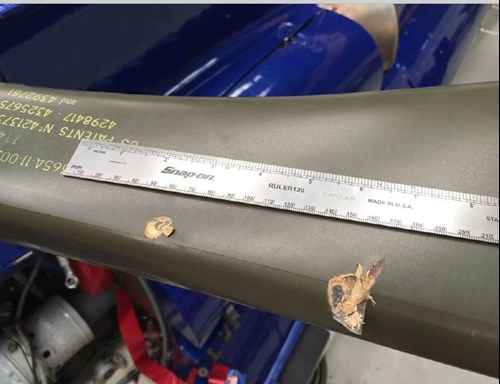 A spanner that had been used during the third track and balance related adjustments could not be located. It was later located on an adjacent taxiway about 43 m from the hangar. Due to the scuff marks and scratches found on the spanner, it was determined that it had been left in the rotor head area and was likely ejected during the aircraft start up.

The pilot was aware that flight control maintenance had been conducted… The pilot signed the aircraft technical log and ‘accepted’ the aircraft prior to each of the three test flights.

The pilot reported that the aircraft handled normally throughout the three test flights.

The operator’s Maintenance Organisation Manual (MOM) required that a work pack for maintenance tasks be created by the Maintenance Controller.  LAME 1 explained to the ATSB that no work pack had been created for the task but they did annotate the ground run/test flight sheet and cross-referenced this in technical log. 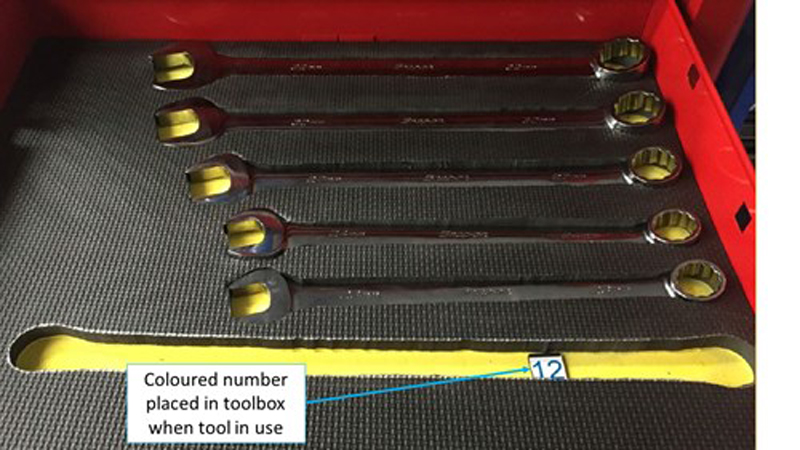 While there was a practice of tool control in place prior to the incident, formal procedures had not been documented…

The tool control practice… required that that each tool removed from the toolbox be tagged out by the person removing the tool. Each engineer was assigned a series of numbered tags of a certain colour, and the tag was placed into the ‘empty’ location (cut out) of the tool being used.

A review of both the toolbox and the engineer’s assigned tags would quickly identify if any tools were still in use.

The MOM stated that induction training of all staff shall be carried out on all new maintenance staff. This training was to provide staff with sufficient information to enable them to integrate into the company and to ensure compliance with the policies and procedures of the organisation. However, there was no written record of any such induction training having taken place.

This incident illustrates some downside of undocumented practices, including the rationale for their use may not be entirely clear (here the tools were not were not being inventoried before flight) and limited training alone may not result in consistency.

The ATSB say the organisation involved “conducted a thorough internal investigation” and advised the ATSB that they are taking the following actions:

A tool control procedure was in place at the time of the incident, however, the procedure had not been documented in the MOM. Additionally, there was no documented procedure requiring the tools to be returned to the toolbox prior to the aircraft being started.

The operator will incorporate the tool control procedure into the MOM. This procedure requires that all tools used during any aircraft maintenance are returned to the tool storage location prior to any of the company aircraft being started.

All maintenance personnel be provided with sufficient training and information to enable them to understand the workings of the organisation, its policies, manuals, procedures and their individual responsibilities.

…a range of other issues identified in regard to training and documentation procedures, and [they] have initiated remedial action in all these areas.

The Flight Safety Foundation (FSF) Basic Aviation Risk Standard for Offshore Helicopter Operations (BARSOHO), launched in May 2015, is orientated around a risk bow-tie, contains a number of common and specific threat controls.  The whole BARSOHO standard is freely available with an accompanying implementation guide.  Among the controls for the threat of Aircraft Technical Failure is Control 8.6 on Tool Control:

The associated BARSOHO Implementation Guide goes on to say:

The maintenance organization should demonstrate that the tool control procedures in place are effective at preventing tools being left on aircraft and posing a risk of causing jamming or damage in-flight.

Maintenance management must take responsibility for the oversight of any personal tools used by their staff, when such tools are allowed. Tool control can be easier if company owned tooling is exclusively used and personnel tooling is prohibited from the workplace.

A significant element of inspecting an aircraft prior to panel/compartment closure is intended to locate any foreign object that may have been missed, not just tooling.

During rotor track and balance, the balance weights are a potential source of FOD. Airbus Helicopters has issued Safety Information Notice (SIN) 2964-S-00 recommending the use of specific foam insert tool box to segregate balance weights carried out to the aircraft and those removed. This is to aid a tally of the weights at the end of the task.

UPDATE 1 February 2017: BARSOHO Version 3, fully aligned with the HeliOffshore SPM, is issued and available. This has resulted in this control being renumbered as 2.5 within System Failure.

In the UK and some other countries it is still common for civil aircraft maintenance personnel to supply their own tool kits and with only specialist and calibrated tools being company issued. This makes it far harder to identify when tools are lost.

In one famous example, during a hangar tour a diligent senior manager at an airline picked a tool box at random and asked to see the owner to verify that all the tools were accounted for. To everyone’s general embarrassment it was found the engineer who owned the tool box had passed away several years earlier…

In fact all the offshore helicopter operators in the UK have eliminated personal tooling.  We have previously discussed how one helicopter operator, Bristow, started implementation of an advanced Snap-on tool control solution from 2009 onwards.  In 2014 Monarch Aircraft Engineering (MAEL) contracted with Snap-on Industrial UK to replace all personal tooling at its new state-of-the-art maintenance facility at Birmingham Airport.  Although such advanced technology may seem expensive, it is only a relatively small addition to the cost of the tools themselves and the reduction in risk is significant.

The Snap-on’s networked Level 5 solution used by Bristow and MAEL consists of:

Networkable Tool Control (NTC) provides electronic keyless lockable tool storage units, allowing only authorised personnel to access. MAEL will have real time visibility of the entire maintenance floor tooling inventory. All tools in the system are laser etched with an ID number linked to a specific cabinet within the TCMax asset management system, providing comprehensive tool accountability. When a tool is removed from the cabinet a unique record is generated, providing real-time inventory management including details of who is currently using each tool, on which aircraft, even to a specific area, all linked to a works order. Critical events such as calibration requests, broken or lost tools will trigger an alert including an automatic email distribution to a list of shift supervisors, ensuring immediate action to locate or its timely replacement in the case of a broken tool.

In addition, as the BARSOHO Implementation Guide mentions, attention on identifying any loose article left after maintenance is vital as a last line of defence to releasing an aircraft to service with an errant tool or other item, such small components, reels of lock wire and consumables. One such case involved a bearing element from a roller bearing that jammed a Power Control Unit (PCU) on a Turkish B737-400 in 2009. We have previously discussed a New Zealand’s Transport Accident Investigation Commission (TAIC) investigation report that discussed two incidents with cleaning cloths.

UPDATE 15 August 2016: Police Aviation News reports a case from the US:

4 April 2016 Airbus Helicopters AS365N3 N600LL. Air ambulance of Life Lion Critical Care Transport based at the M. S. Hershey Medical Center, Hershey, PA USA. The aircraft had just undergone maintenance in the vicinity of the tail rotor (Fenestron). As the aircraft was spooling up for flight one of the mechanics involved in the maintenance advised the pilot to shut down due a missing tool. A search turned up a missing box flashlight in an obscured interior ledge.

The company tool control program was followed ensuring all tools were accounted for prior to releasing the aircraft for flight. In addition, the pilot conducted a thorough pre-flight of the aircraft as well noting no discrepancies. Despite implementation and emphasis on tool control which includes shadow tool boxes and other measures this incident still occurred.

The light involved was not part of the formal aircraft maintenance toolbox enrolled in Tool Control.

The light was used was because it provided a generous amount of light for a sufficient duration without rolling around like the flashlight in the toolbox. …this equipment will now be added to Tool Control but it highlights the dangers of using any uncontrolled equipment on an ad-hoc basis.

No matter what approach is used it is also necessary its also necessary to engender a culture were there is no hesitation reporting a lost tool or any other item that could a control restriction or damage.  In 2014 the UK CAA published a frank occurrence report from a maintenance engineer working on a Sikorsky S-92A:

The aircraft came back with a fault on the #2 measuring head for the RIPS. I decided to replace the measuring head on the apron. I picked a small carrying toolbox with 5 different size spanners (because I did not know the size of the union that needed to be replaced from the old measuring head to the new one) and a screwdriver and replaced the measuring head while standing on the sponson.

10 minutes after takeoff I went back to the carrying toolbox to put all the tools away and the 1 inch spanner was missing. Then I knew I left it on the sponson.

I went directly to the supervisor on shift to tell about the missing tool, and directly to Ops and they called to the airport to check for a spanner on the apron, taxiways and runway. Nothing was found and later the [Helideck Landing Officer] HLO on the platform found the spanner still lying on the sponson where I left it. For luck the spanner is back and nothing bad happened extra.

Aerossurance has previously written these articles that should be of interest: