On January 7, 2013, about 1021 eastern standard time, smoke was discovered by cleaning personnel in the aft cabin of a Japan Airlines (JAL) Boeing 787-8, JA829J, which was parked at a gate at General Edward Lawrence Logan International Airport (BOS), Boston, Massachusetts. About the same time, a maintenance manager in the cockpit observed that the auxiliary power unit (APU) had automatically shut down. Shortly afterward, a mechanic opened the aft electronic equipment bay and found heavy smoke coming from the lid of the APU battery case and a fire with two distinct flames at the electrical connector on the front of the case. None of the 183 passengers and 11 crewmembers were aboard the airplane at the time, and none of the maintenance or cleaning personnel aboard the airplane was injured. Aircraft rescue and firefighting personnel responded, and one firefighter received minor injuries. The airplane had arrived from Narita International Airport, Narita, Japan, as a regularly scheduled passenger flight operated as JAL flight 008 and conducted under the provisions of 14 Code of Federal Regulations (CFR) Part 129.

The APU battery model is the same model used for the 787 main battery. On January16, 2013, an incident involving the main battery occurred aboard a 787 airplane operated by All Nippon Airways during a flight from Yamaguchi to Tokyo, Japan. The airplane made an emergency landing at Takamatsu Airport (TAK), Takamatsu, Japan, shortly after takeoff. The Japan Transport Safety Board investigated this incident with support from the National Transportation Safety Board (NTSB).
Boeing was responsible for the overall integration and certification of the equipment in the 787’s electrical power conversion subsystem, which is part of the airplane’s electrical power system (EPS). Boeing contracted with Thales Avionics Electrical Systems to design the 787 electrical power conversion subsystem, which includes the main and APU batteries. Thales then subcontracted with various manufacturers for the main and APU battery system components, including GS Yuasa Corporation, which developed, designed, and manufactured the main and APU batteries.
Boeing was required to demonstrate that the 787’s design complied with the Federal Aviation Administration’s (FAA) Special Conditions 25-359-SC, “Boeing Model 787-8 Airplane; Lithium-Ion Battery Installation,” which detailed nine specific requirements regarding the use of these batteries on the airplane. As part of the compliance demonstration with these requirements and 14 CFR Part 25 airworthiness standards, Boeing performed a safety assessment to determine the potential hazards that various failure conditions of EPS components could introduce to the airplane and its occupants. Boeing determined that the rate of occurrence of cell venting for the 787battery would be about 1 in 10 million flight hours. However, at the time of the BOS and TAK incidents (both of which involved cell venting), the in-service 787 fleet had accumulated less than 52,000 flight hours.
After the BOS and TAK events and the FAA’s subsequent grounding of the US787 fleet, Boeing modified the 787 main and APU battery design and its installation configuration to include, among other things, a stainless steel enclosure for the battery case and a duct that vents from the interior of the enclosure to the exterior of the airplane to prevent smoke from entering the occupiable space of the airplane. In April 2013, the FAA issued an airworthiness directive mandating the installation of the modified battery aboard US 787 airplanes before they could return to service.
The 787 main and APU battery design was also modified to mitigate the most severe effects of an internal short circuit (that is, cascading, cell-to-cell thermal runaway of other cells within the battery; excessive heat; flammable electrolyte release; and fire). The recommendations resulting from the safety issues identified during this investigation could help prevent such effects from occurring in future battery designs.
The NTSB identified the following safety issues as a result of this incident investigation: 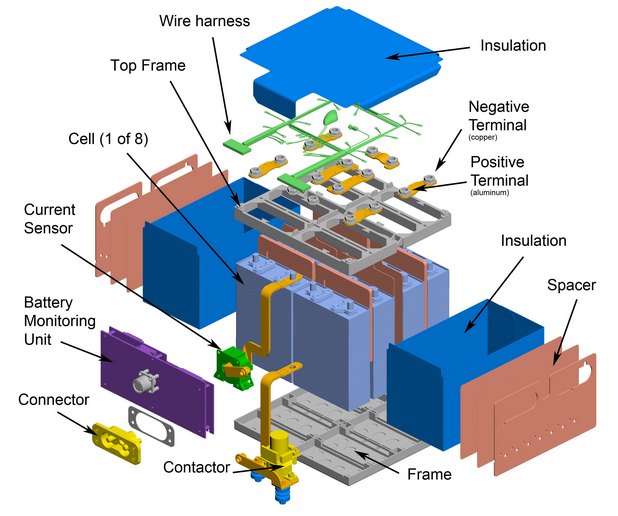 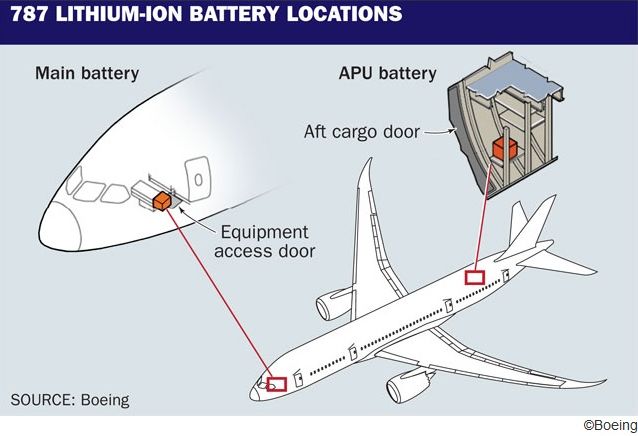 The NTSB determines that the probable cause of this incident was an internal short circuit within a cell of the APU lithium-ion battery, which led to thermal runaway that cascaded to adjacent cells, resulting in the release of smoke and fire. The incident resulted from Boeing’s failure to incorporate design requirements to mitigate the most severe effects of an internal short circuit within an APU battery cell and the FAA’s failure to identify this design deficiency during the type design certification process.
As a result of this investigation, the NTSB makes safety recommendations to the FAA, Boeing, and GS Yuasa. The NTSB previously issued safety recommendations to the FAA regarding (1) insufficient testing methods and guidance for addressing the safety risks of internal short circuits and thermal runaway and (2) the need for outside technical knowledge and expertise to help the FAA ensure the safe introduction of new technology into aircraft designs.